Dr Joe Kosterich, a Perth GP and a director of the Australian Tobacco Harm Reduction Association, recently argued in WA Today that e-cigarettes should be seen as  no-brainer, common-sense harm-reducing equivalents of seat belts or condoms for smokers. And we should not dither around: there were no randomised controlled trials needed when car seat belts were made mandatory nor for condoms when they were put in the forefront of HIV/AIDS prevention, he argued.

He repeated the factoid that e-cigarettes reduce harm by 95%, said there was “absolutely no evidence” of e-cigarettes being  gateways to later uptake of smoking in teenagers and boldly claimed that “dual use [smoking as well as vaping) is still better than only smoking”. And he claimed that the fall in smoking has stagnated in Australia, while falling faster in nations where vaping is widespread.

Each of these claims is highly contestable. Let’s go through them.

Seatbelts and condoms for smokers?

Seat belts and condom use prevent unwanted adverse outcomes from driving and sex, but do e-cigarettes do the same by reducing harm?

The fact is we do not know. The average vaper bastes their mouth, throat and lungs with vaporised nicotine and chemical flavouring nano-particles and propylene glycol 200 times a day – over 73,000 times a year. Diseases caused by smoking typically take 30-40 years to be diagnosed. Yet vaping has only been in common use in some nations for barely 10 years.  So if we are comparing the health risks of smoking with vaping we have no direct evidence of what might lie down the track. This is why the prestigious US National Academies of Science, Engineering and Medicine (NASEM) declared in its door-stopper 680 page review of the evidence on e-cigarettes in January 2018 that “There is no available evidence whether or not e-cigarette use is associated with intermediate cancer endpoints in humans. This holds true for e-cigarette use compared with use of combustible tobacco cigarettes and e-cigarette use compared with no use of tobacco products.”

A 2017 review of the emerging evidence on pulmonary effects caused by e-cigarette use provides many causes for concern: 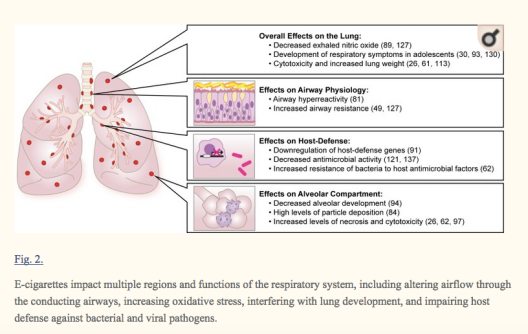 This figure started out as simply a guess made by a group of 12 people hand-picked for a process led by huge fan of e-cigarettes, David Nutt, who has since declared publicly that e-cigs are the most significant advance in medicine since antibiotics.

Public Health England has also used the 95% figure as a robust estimate of comparative risk, with Prof John Newton of PHE telling an Australian parliamentary committee that “We say what really matters is that evidence underlying this figure came from the Nutt report.”

However, the Nutt group’s report made the extraordinarily frank statement that  “A limitation of this study is the lack of hard evidence for the harms of most products on most of the criteria.” Limitations don’t get much more fundamental than that.

There were no randomised controlled trials for seat belts or condoms

If someone megaphoned they had a new substance that cured cancer, asthma or HIV and argued it was simply too important to tie their miraculous new breakthrough up in regulatory red tape and that they should be allowed to sell and promote it everywhere immediately, they would be laughed out of the room and told firmly to do what all drug manufacturers have to do: have their claims evaluated through official, independent drug regulation schemes like we do in Australia with the Therapeutic Goods Administration. What have vaping manufacturers to fear from the normal regulatory processes if their products are as safe and effective as they say?

Is dual use better than just smoking?

In England today where vaping is widespread, 61.3% of adults who vape also smoke (see slide 8 in Powerpoint set dated 10 Apr 2018 here).  If you smoke 20 a day and reduced to 10 a day, it’s beyond argument, surely, that you will have reduced your risk? Sorry, but that’s not what the evidence shows. A Norwegian cohort of 51,210 people followed from the 1970s until 2003 found “no evidence that smokers who cut down their daily cigarette consumption by  more than 50% reduce their risk of premature death significantly”. There are several more large longitudinal studies showing the same counter-intuitive outcome. Stopping smoking altogether is the only sure way to reduce risk. We do not know if reducing smoking by also vaping reduces long term health risk.

But emerging evidence already suggests it’s unlikely to. This graph from a 2018 study in JAMA shows dual users (smokers who also vape) had a higher prevalence of six pulmonary symptoms than smokers who did not vape. 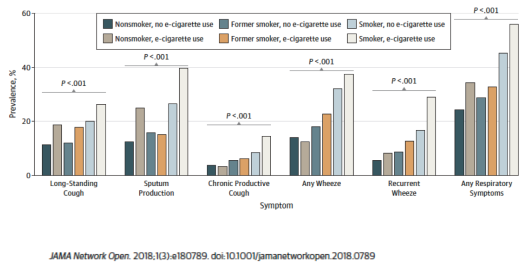 There’s no evidence of gateway effects with kids

Kosterich was unimpressed with a health minister’s statement “The overwhelming medical advice and evidence is that it’s likely to lead to the uptake of smoking…”.  He called it “disgraceful” that the minister  should have been “so badly advised”, stating “There is absolutely no evidence anywhere in the world that vaping leads to the uptake of smoking.”

Apparently in all seriousness, Kosterich also argued  that “The public understands international data better than the medical establishment.”

We can take Joe Kosterich’s word for this, or we can read and acknowledge what the US  NASEM report expert panel concluded about the evidence here: “There is  substantial evidence that e-cigarette use increases risk of ever using combustible tobacco  cigarettes among youth and young adults” and “moderate evidence that e-cigarette use increases the frequency and intensity of subsequent combustible tobacco  cigarette smoking.”

Has the fall in smoking stalled in Australia?

Vaping advocates keep claiming that the fall in smoking in Australia has stalled, as a pretext for declaring it’s time to open the floodgates to e-cigs here. They base this on the fall  between just two data points (2013 and 2016) not reaching statistical significance in national survey by the Australian Institute of Health and Welfare (AIHW). But they are silent on the largest and longest running survey of smoking in Australia which shows nothing of the sort. The Roy Morgan Research company has collected monthly data on smoking rates around the country since 1974 (see Figure 1.3.3 here), selling this information to tobacco companies. Each year, over 50,000 people are interviewed for these surveys and the latest available data from August 2017 show a rolling average below 15% for Australians aged 18 for every month of 2017, compared to the latest data from the UK where 15.1% smoke and vaping widespread.

Like all population surveys, the AIHW data on smoking prevalence in Australia often cited by vaping advocates  has margins of error. The AIHW’s table of relative standard errors and margins of error indicates for example, that the prevalence of daily smoking among people aged 18 years and over in 2016 was somewhere between 12.2% and 13.4%.

“The estimated total market in … Australia decreased, notably due to the impact of increased tobacco tax and retail prices:

Kosterich told a conference in Poland recently that “It is in some respects a game that we are playing … we are not actually playing a scientific game. If it was about the science, there’d be no debate. There would be no debate. But there is a debate because it’s not about the science. It is an ideological warfare and particularly in Australia.”

The NASEM report reached 46 conclusions about the available evidence on e-cigarette safety, effectiveness and uptake. In 29 of these 46 conclusions (63%), NASEM labelled this evidence moderate, limited, insufficient or non-existent. This is not remotely a situation where there is “no debate” about the science, as Kosterich asserted to his audience.

Finally, his statement “there was one case where an e-cig exploded” sits awkwardly with data reviewed by the US Fire Administration which found 195 cases between 2009-2016. They noted  “The combination of an electronic cigarette and a lithium-ion battery is a new and unique hazard. There is no analogy among consumer products to the risk of a severe, acute injury presented by an e-cigarette” . For those not squeamish, here is a showreel of some e-cigarette explosion incidents.

We all know that genies are hard to put back in their bottles. If they are good, benevolent genies, they can be a force for good, but if they turn out to be evil genies, letting them out can be disastrous. That happened with cigarettes. We need to learn from past mistakes and take a precautionary response with e-cigarettes, as all Australian governments are doing.

2 thoughts on “Are e-cigarettes really the seatbelts and condoms of tobacco-caused disease prevention?”