I’m often asked “so now that we have plain tobacco packs, with their huge graphic health warnings, what’s next in the marshaling yard to try and drive home the realities of the risks of smoking?” 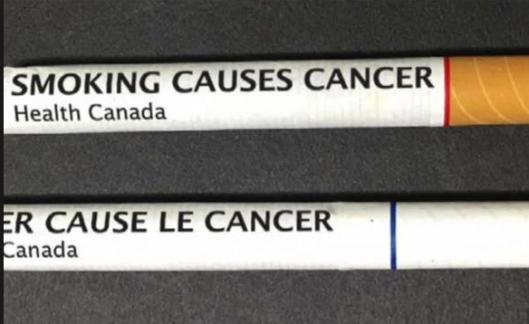 One of the most potent of all the graphic health warnings that have run in Australia since 2006 is the one about smoking causing gangrene.

Gangrene (rotting flesh) can occur with peripheral vascular disease. It occurs mostly in the extremities of the body, particularly in the in the feet and toes when insufficient blood supply reaches these areas due to narrowing of the blood vessels. Smoking is a major risk factor for PVD because it is a vasoconstrictor and raises blood pressure.

The first public campaign to highlight gangrene was run in New South Wales in a 1983 campaign for the NSW health department developed by John Bevins.  A TV ad on amputation after gangrene was screened in the years after the gangrene pack warning appeared. 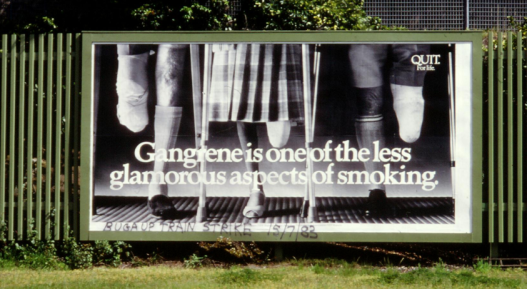 I helped find the lower photograph below of the gangrenous foot that was used in Australia’s first generation of graphic health warnings that appeared from 2006. I obtained it from a surgeon at Sydney’s Westmead Hospital where I worked at the time. He gave me these two photographs of gangrenous limbs of smoking patients. I sent them to the Health Department in Canberra who tested them in focus groups. The first one showing the exposed bone was apparently rejected as being just too confronting.

The huge reaction the gangrene warning and the public discussion the graphic warnings caused got me thinking about how they might be made even more powerful.

In 1981, I saw John Waters’ cult film, Polyester staring the drag queen Divine and Tab Hunter. Waters incorporated “Odorama” scratch and sniff cards into the film. Wikipedia notes that “Special cards with spots numbered 1 through 10 were distributed to audience members before the show (see picture below). When a number flashed on the screen, viewers were to scratch and sniff the appropriate spot. Smells included the scent of flowers, pizza, glue, gas, grass, and faeces. For the first DVD release of the film the smell of glue was changed due to, as Waters states, “political correctness”. The gimmick was advertised with the tag “It’ll blow your nose!”

Gangrene has a very potent foul smell that can be highly distressing to patients and those who care for them before amputation.  When I started being asked the “what’s next?” question, I wondered about the potential of extending tobacco health warnings into the olfactory zone.

I called up a Professor of Chemistry at my university and asked him whether he knew of any chemical attempts to develop the smell of rotting flesh. I explained my interest. Absolutely deadpan and as quick as a flash, he told me that there were two candidate organic compounds cadaverine and putrescine. Putrescine is manufactured industrially. He called me back an hour later, having looked up the costs of bulk supplies of putrescine. I recall it was not off the planet and in any case, would be paid for by tobacco companies if the idea ever progressed.

Australia’s tobacco packaging legislation could easily be amended to allow for the mandatory incorporation of a putrescine scratch and sniff tab on packs carrying the gangrene warning.

In 2015, two psychologists conducted experiments where they exposed subjects to three odours: a neutral smell, ammonia and putrescine. They recorded how long it took subjects to walk 80 metres away from the campus exposure locations after smelling these odours. Those randomly allocated to the putrescine smell walked away faster from the exposure sites, causing the authors to speculate that “the results are the first to indicate that humans can process putrescine as a warning signal that mobilizes protective responses to deal with relevant threats.”

There is a conventional folk wisdom popular among continuing smokers that tobacco pack warnings have no impact: they keep smoking regardless and just switch off. The companion argument here is that smokers are fully informed about the risks of smoking and so banging the same drum about health risks is a useless strategy.

There are several big problems with these arguments. First, if health warnings were so ineffective, someone needs to explain why  the tobacco industry has fought them tooth and nail all around the world for decades, particularly when they moved from anodyne to explicit, specific and graphic warnings. As recently as December 2016, British American Tobacco’s lawyers were attempting to stymie increased graphic health warnings in Hong Kong and Philip Morris did all it could to prevent Uruguay from implementing graphic health warnings. Companies don’t usually bother attacking policies that are ineffective and have no impact n their bottom line.

Second, it has been repeatedly shown that the overwhelming reason given by ex-smokers in explanation about why they were determined to quit, is health concerns. There is daylight between those concerns and other reasons that are nominated, as shown in the table below. Just where is it that smokers pick up these concerns from? Where would they ever find out or reflect on what atheroma or a brain bleed from stroke looks like if they never saw an image of it? How would they know about a person with emphysema’s constant struggle to breathe if they had not seen vision of it in a health warning ad? People with end-stage emphysema don’t tend to walk around in public very much, because they can’t.

And third, there is a very substantial body of research that examines questions about the impact of pack warnings on smokers’ understanding of risk, intention to quit and quitting behaviour, concluding that warnings can be powerful ingredients in motivating quitting.

Big Tobacco will hate this proposal. And that’s all we should really need to know in deciding that it’s an excellent idea.