Public health professor Kamran Siddiqi from the University of York tweeted today about a conference presentation from Robert West, who apparently was arguing that e-cigarettes “are perhaps the only smoking cessation intervention that has triangulation of evidence of effectiveness from three types of research”” randomized controlled trials, observational studies and population trends.

Putting aside that there have been many RCTs, observational studies and analyses of population trends which have focused on nicotine replacement therapy and other smoking cessation interventions, what does this evidence of effectiveness show about e-cigarettes?

I commented in an earlier blog about an English RCT where ecigs were compared to nicotine replacement therapy in smokers attending stop smoking services (so a self-selecting group who all also received supportive quit counselling, something that does not occur in real world NRT or ecig use), E-cigs were superior to NRT, but that was not saying much because quit rates in both groups were low.

Very recently a New Zealand study compared 1124 e-cigarette naïve smokers motivated to quit smoking who had been allocated to three arms of an RCT with the principal outcome of carbon monoxide verified continuous abstinence from smoking when measured at 6 months after the trial commenced. The trial compared (1) those given nicotine patches plus an e-cigarette with nicotine (2) those given nicotine patches plus an e-cigarette without nicotine and (3) those given nicotine patches. All three arms were offered 6 weeks of telephone delivered behavioural support (something that only tiny fractions of smokers trying to quit in real-world situations ever avail themselves of) and received a median of 3 such sessions. Analysis was on an “intention-to-treat” basis (ie of all who started the trial, including those who dropped out or were lost to follow-up) not just those who were available for assessment at the end of the trial. All who dropped out were assumed to be still smoking.

The study found that

I cannot think of any prescribed drug used for any condition where the condition persisted after 6 months use for 93%  of users and where anything but the language of failure would be used about such an outcome. Is there anyone who would hail a 93% failure rate for contraceptives, antibiotics, cholesterol lowering drugs, analgesia, malaria prophylaxis or anything else as even a modest success?

The most important observational data we have on what happens to smokers who use e-cigarettes in normal conditions of use in the real world comes from longitudinal cohort studies of randomly selected people across whole communities. In an earlier blog, I summarized what two such recent papers told us about e-cig use. I reproduce a section of that blog below.

In 2018, two particularly important papers were published by US researchers using the longitudinal PATH ( Population Assessment of Tobacco and Health) data set.

Let’s take a close look at what they found.

This important report on transitions in the vaping and smoking status of a nationally representative cohort of American  adults  aged 18+ who use electronic cigarettes (EC) provides rich data that greatly advances our understanding of the natural history of EC use.

If we examine the report’s data and consider the net impact of vaping on the critical goals of having vapers stopping smoking and vaping non-smokers not starting to smoke, the findings are very sobering and should give strong reason for pause among those advocating e-cigarettes as a game-changing way of stopping smoking.

The table below shows that for every person vaping at Wave 1 who benefited across 12 months by quitting smoking, there were 2.1 who either relapsed to or took up smoking. Most disturbingly, in this adult cohort nearly one in four of those who had never been established smokers took up smoking after first using EC. Concern about putative gateway effects of ECs to smoking have been dominated by concerns about youth. These data showing transitions from EC to smoking in nearly a quarter of exclusive adult EC users with no histories of established smoking should widen this debate to consider adult gateway effects too. 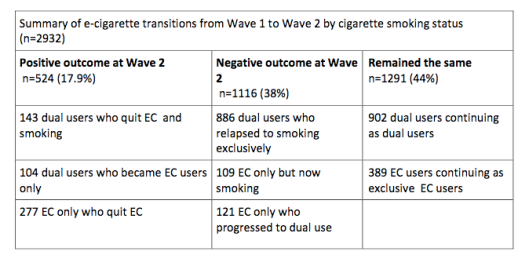 By far the largest proportion of those with negative outcomes are those dual users who relapsed to smoking (886 or 43.5% of dual users). As the authors noted in their discussion, many of these were infrequent EC users, possibly involved in transitory experimentation at Wave 1. If we add the 902 who were still dual using at Wave 2, then 1788 of 2036 dual users (87.8%) in this sample might be said to have been held in smoking (dual using or exclusive smoking) 12 months later compared to 12.1% dual users who may have benefited by using ECs.

Commercial interests in both the tobacco and EC industries would be more than delighted with these findings. However, from public health harm reduction perspective these results argue against EC being a revolutionary effective harm reduction strategy, and point to their far stronger potential to both recruit smokers and hold many smokers in smoking.

In a second paper using the PATH data, the authors considered persistent abstinence (not using tobacco for more than 30 days). The red highlighted section of the table below shows that those smokers who used ecigs (called ENDS in the table) had the worst persistent abstinence all-tobacco quit rates of any group in the cohort (5.6% of those who were vaping at the Wave 1 survey  and 3.7% of those who too up vaping between Wave 1 and Wave 2). By far the most successful all-tobacco quit rate was for “no aid used” (ie cold turkey or unassisted cessation) with 12.5%.

When we multiply these quit rates by the numbers of smokers using each quit method, the yield of persistent quitters is even starker (see the second table below derived from the data in the table immediately below).

So in this major national cohort of US smokers, not only did EC use produce the lowest rate of persistent abstinence from tobacco use after one year compared to all other quit methods, but EC’s contribution to population-wide tobacco abstinence was utterly dwarfed by all other methods (10.9% v 89.1%). The much-denigrated and neglected unassisted cessation approach quietly ploughed on, continuing  its massive historical dominance of how most ex-smokers quit, contributing 1.5 times more quitters than all other methods combined.

The Smoking in England Toolkit (STS) project (led by Robert West) provides wonderful data on the apparent associations between the downward trend in smoking prevalence in England since the study began in November 2006 through to recent months (see graph below). The dramatic upsurge in smokers using e-cigarettes in quit attempts that commenced in late 2012 and has more-or-less plateaued since mid 2013 does not appear to have had any marked impact on the slope of the historically declining smoking prevalence rate.

West co-authored an important report in late 2017 where they looked at whether the surge in e-cigarette use in England and whether this was reducing the number of cigarettes being smoked at the population level across the country. Their conclusions?

Two of the main pillars of the case made for e-cigarettes by their advocates are that they are a game-changing, disruptive technology which are powerful ways of quitting and dramatically cutting down the number of cigarettes smoked. The evidence above gives a rather complexion to such over-blown hype.

Meanwhile, data on the association between the changing affordability of smoking and smoking rates across the same period that e-cigarette sales have been rising offers a rather different picture, (see for example, UK data below)

1 thought on “Evidence of the effectiveness of e-cigarettes: dismal or disrupting?”