In a recent Senate motion from the Centre Alliance’s Sen Stirling Griff urging the government to regulate the manufacture and labeling of e-cigarette liquid to ensure safety and consistency of ingredients in imported and domestically-available products, and ban the importation of e-cigarette liquids containing nicotine, Griff was supported by his colleague Sen Rex Patrick, and all Coalition, Labor and Green Senators, with only the predictable brains trust of Pauline Hanson, Malcolm Roberts and Jacqui Lambie voting against the motion. The funereal-faced vaping supporter Senator Paterson was not there for the vote.

In the eighth report of the Petitions Committee presented to the 46th Parliament on Feb 10, 2020, we read that a whole 238 Australians signed a Legalise Vaping Australia petition to  the parliament. This was considerably more than the 15 or so dedicated vaping advocates who turned out in a Sydney suburban park to launch Australia’s  first “Aussie Vape Day” in May 2019.

Undeterred by the political demise of  its political heavyweight champions Leyonhjelm and Bernardi, and the above rather modest numbers that Legalise Vaping Australia has  inspired to turn out at shows of strength or to sign petitions, like the limbless, gallant Black Knight with only a flesh wound, our local vape warriors are currently at it again. Another petition is up and running and there’s an on-line campaign to have vapers get into the inboxes of their local members and warn them that “we vape and we vote”, an observation that has not exactly changed the course of politics in earlier outings.

A few minutes of web browsing reveals that some vaping advocates risk getting a serious bout of repetitive strain injury from all this button clicking, not to mention a virulent dose of  dreaded Pinocchio nose syndrome.

This is producing some hilarious examples of unleashed lobbying ineptitude that seem destined to become case studies in how to not run a lobbying campaign. Here for your enjoyment and early voting for the political division in the 2020 Darwin Awards, are a couple of examples, out there in plain sight:

Shayne didn’t seem to realise that senators don’t have electorates.

But the goalkeeper for the darts team?  Meet Stuart who has the same misconception, but … errm … has missed the idea that you are not allowed to be registered to vote in more than one electorate. 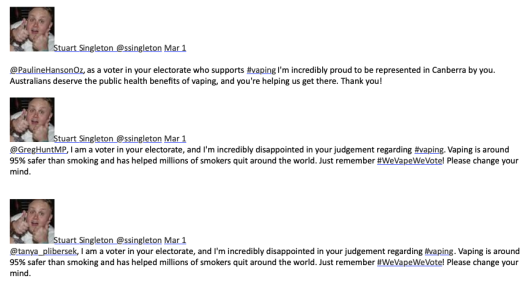 Vaping Australia is a project of the Australian Taxpayers Alliance, and part of the same stable of regulation-loathing libertarians which all apparently share exactly the same thoughts on issues they tweet about.

Legalise Vaping Australia says it has over “13,000” signatures on its latest petition.

But LVA’s fraternal twin, the Australian Taxpayers’ Alliance, has what some might some  rubbery form with numbers. 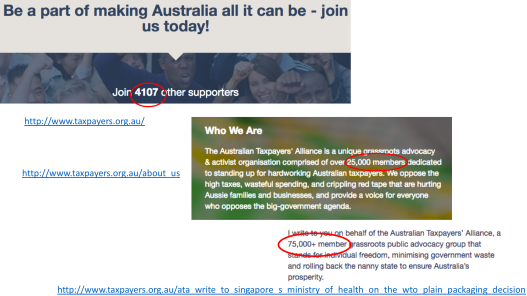 Funny, but I have a feeling someone might be poised to go through these 13,000+ signatures and do some random checks on the bona fides of some signatories.