ATHRA, a small Australian lobby group for e-cigarettes with a Twitter following today of all of 494 (including many vaping activists from overseas), often argues that smoking prevalence in Australia is lagging behind the US and the UK. Its website states “Australia’s National Health Survey confirms that smoking rates have plateaued in Australia. According to the national survey this month, 15.2% of Australians adults smoked in 2017-18 compared to 16% three years ago.”

“Current smoking” to the Australian Bureau of Statistics means daily smoking plus “other” which means “current smoker weekly (at least once a week, but not daily) and current smoker less than weekly.” We now have 13.8% of adults smoking daily, and a further 1.4% less than daily.

And very critically, unlike in the USA and the UK, Australian data on “smoking” explicitly include use of other combustible tobacco products (see questions establishing “smoking” below). This means that Australia’s 2017-2018 15.2% smoking prevalence includes exclusive cigarette smokers, all cigarette smokers who also smoke other combustible tobacco products and any smokers who exclusively smoke any of the non-cigarette combustible products (eg: cigars, cigarillos, pipes, waterpipes, bidis).

ATHRA repeatedly asserts that the US and the UK, both awash with ecigarettes, have both galloped ahead of Australia in reducing smoking. A tweet from November 9, 2018 (below) shows  a graph they like to use.

ATHRA’s graph above shows the US National Health Interview Survey (NHIS) “18+ smoking rate” being 14% for 2017. NIHAS defines “Current cigarette smokers [as] respondents who reported having smoked ≥100 cigarettes during their lifetime and were smoking every day or some days at the time of interview.”

But in fact, 14%  is the US prevalence for only cigarette smoking, not all smoking— see https://www.cdc.gov/nchs/nhis/SHS/tables.htm If we add all the other smoked tobacco products in widespread use in the USA (cigars, cigarillo, pipes, water pipes, hookahs, bidis) the prevalence of smokers who use any combusted tobacco product rises to 16.7% with an upper confidence internal boundary of 17.3% (see the table here).  Quite a way above Australia’s 15.2% rate.

More recent US data for the first half of 2018 show “the percentage of adults aged 18 and over who were current cigarette smokers was 13.8% (95% confidence interval = 13.08%-14.53%) which was not significantly different from the 2017 estimate of 13.9%.” So far, ATHRA has not issued any public statements about the fall in cigarette smoking stagnating in the US despite some 3% of adults vaping, but these can’t be far off. Surely?

The year before (2016), also in the midst of untrammelled ecigarette promotions, the prevalence of current cigarette smoking among US adults was 15.5%, a  slight but statistically nonsignificant rise from the 2015  figure of 15.1%.

The UK government’s official smoking survey asks “do you smoke cigarettes at all nowadays? Please exclude electronic cigarettes”. In 2017, 15.1% of UK adults aged 18+ answered yes, but this figure also does not include people who smoke only non-cigarette combustible tobacco products such as cigars and pipe tobacco. So yes. 15.1% may be a cigarette paper below Australia’s 15.2% rate but it’s hardly a “man the lifeboats, the boat is sinking” difference that ATHRA and its spokespeople try to paint.

And mostly down to ecigarettes? 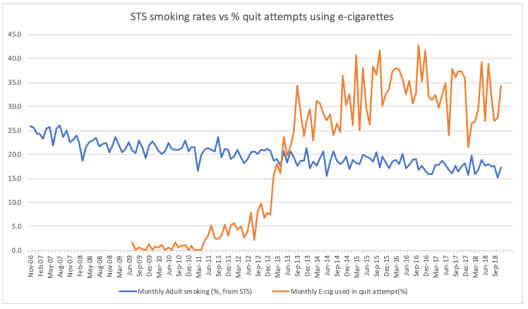 No one could look at this graph and point to any clear relationship between the two.

Colin Mendelsohn from ATHRA has been beating the same “the wheels have fallen off falling smoking prevalence” drum since 2017. I criticised his statements at length here in August 2017.

The proportion of adult Australians who have never smoked was 52.6% in 2014-15 and rose to 55.7% in 2017-18. These figures are the tobacco industry’s on-going nightmare, presaging it as a sunset industry which will wither and starve from lack of “replacement” customers as its current users quit or die.

In my August 2017 critique I highlighted several reasons why Mendelsohn’s claim at the time that there had been an increase in the number of smokers in Australia needed careful circumspection. I wrote:

“Mendelsohn appears to have arrived at a figure of 21 000 extra smokers by multiplying the percentage of daily smokers listed for each year in Table 3 of the AIHW report, with an estimate of population numbers of Australians 18 years and over in June 2013 and 2016 released by the Australian Bureau of Statistics in June 2017. These population estimates were published some months after the AIHW would have undertaken the analysis of smoking prevalence for 2016 and some years after it released its estimate of prevalence in 2013.

The estimate ignores the complexity of how survey results are weighted by population composition. It also ignores the fact that the prevalence figure is only an estimate, with margins of error. The AIHW’s table of relative standard errors and margins of error indicates that the prevalence of daily smoking among people aged 18 years and over in 2016 was somewhere between 12.2% and 13.4%. This means that the number of smokers in 2016 could have been anywhere between 2 293 000 and 2 512 000. A similar range applies to the figure for 2013. The calculation of an extra 21 000 smokers between 2013-2016 is therefore essentially meaningless.

Moreover, the Australian Bureau of Statistics population figures show that between 2013 and 2016, Australia’s population aged 18 years and over grew by 864 340 people as a result of births, deaths and immigration. Many immigrants in this number would be from nations where smoking rates are high, particularly among men.

The elephant in the room? Massive growth in never smokers from smoking prevention.

Media attention has focused on smokers. But applying the same calculation Dr Mendelsohn has done for current smokers to people in the rest of the population, one would conclude that there are more than 870 000 extra non-smokers in Australia in 2016 than there were in 2013 — more than 80 times the number of extra current smokers (and more than 40 times the number of extra daily smokers) that he is so concerned about.”

ATHRA has egg on its face with its apparently naïve understanding of what smoking prevalence data for the three countries actually mean.

Professor Robert West (a leading figure in tobacco cessation research, editor-in-chief of Addiction  and director of the large Smoking in England national study told the BBC in February 2016:

“[This widespread use of e-cigarettes] raises an interesting question for us:  If they were this game changer, if they were going to be – have this massive effect on everyone switching to e-cigarettes and stopping smoking we might have expected to see a bigger effect than we have seen so far which has actually been relatively small” [my emphasis]

“We know that most people who use e-cigarettes are continuing to smoke and when you ask them they’ll tell you that they’re mostly doing that to try to cut down the amount they smoke.  But we also know that if you look at how much they’re smoking it’s not really that much different from what they would have been doing if they weren’t using an e-cigarette.  So I think as far as using an e-cigarette to reduce your harm while continuing to smoke is concerned there really isn’t good evidence that it has any benefit.” [my emphasis]

Esther Han at the Sydney Morning Herald reported earlier this year here about funding received by ATHRA from two companies involved in the vaping industry and here about their receipt of $8000 from an organisation that received funding tobacco companies.

Fortunately, governments in Australia have heeded the evidence reviews from the CSIRO, the Therapeutic Goods Administration and the NHMRC, and the advice from the overwhelming proportion of public health and medical organisations (table below) to take a precautionary approach about many of the over-hyped claims being made for ecigarettes and the vast areas of research where the evidence remains non-existent or very limited. 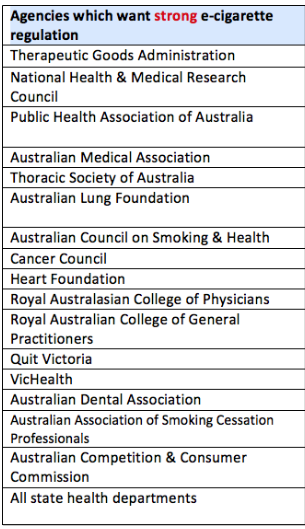 With multi-party support, Australia remains in the very front line of global tobacco control with commitments like plain packaging, high taxation, retail display bans and smoke free policies. Australia’s smoking prevalence would look a lot better if governments had not fallen asleep at the wheel in one critical areas- failing to run evidence-based national media campaigns since 2012.

After it was recently announced that Philip Morris/Altria is planning to invest in cannabis, ATHRA’s Colin Mendelsohn tweeted on Dec 8 that it was “surely a good thing if they make money” from this move. With 20.8% of US high school kids now currently vaping (at least once in the past 30 days)  compared to 3% of US adults, and the immense appeal of Juul involving its discreet properties (easily secreted, minimal clouding, memory stick lookalike), it is reasonable to ask what could possibly go wrong with PMI’s planned entry into the cannabis market. Vaping equipment is already being used to vape cannabis and other  drugs. Philip Morris of course would be horrified if children were to vape dope before sitting down in the classroom. It would just never happen, right? 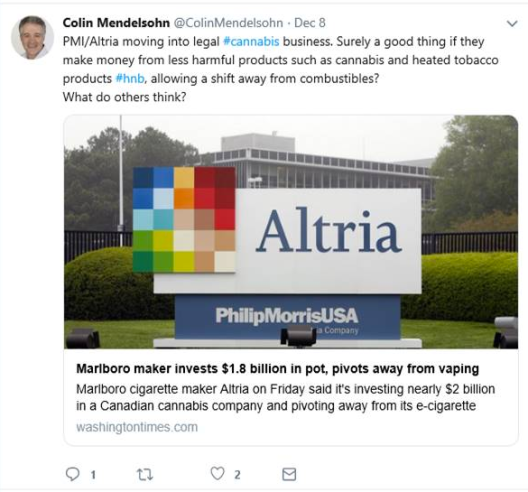 8 thoughts on ““Man the lifeboats! Australian smoking has stopped falling” … or has it?”